Now This Is Interesting!

Maybe Volkswagen’s slogan “Drivers Wanted” must have inspired me to become a waterfowl outfitter because I put on an embarrassing amount of miles every year.

With the new website launch under our belt it’s now time to start on the rest of the wheel house. Outfitting for waterfowl in Manitoba 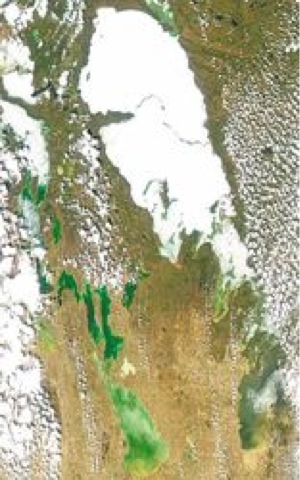 A satellite image of blue-green algae on Lake Winnipeg taken in May 2007.
When Lake Winnipeg was named 2013’s threatened lake of the year, scientists muttered: “I told you so.”
“It really was no surprise to me,” said University of Manitoba research scientist Greg McCullough. “The condition in Lake Winnipeg is far more serious than any of the other large lakes in the world.”
In 2012, Lake Titicaca in Peru held the sad distinction, the year before that, Colombia’s Laguna de Fuquene. The Middle East’s Dead Sea had a turn in 2006, Africa’s Lake Victoria in 2005 and Mexico’s Lake Chapala in 2004.
And now Lake Winnipeg.
McCullough and a team of scientists, many from the University of Manitoba, rang the alarm bells years ago — loud enough to raise widespread public support for the world’s 10th-largest lake.
Their concern probably played a role in this year’s threatened-lake title.
“As one of the largest lakes in the world, Lake Winnipeg is very well known but not much is known internationally about the dramatic environmental problems of the lake and the wetlands in its watershed,” said Global Nature Fund’s Udo Gattenlohner on the lake’s selection.
Now, as forecasters adjust their spring flood predictions yet again, scientists are already out on field trips to study the lake.
They know floods feed toxic blue-green-algae blooms and they know the algae will choke the oxygen out of the lake, crash the fishery and ruin tourism. Eventually. Inevitably.
Already, green mats cover 15,000 square kilometres in the north basin during the summer and sudsy waves lap at shorelines in the south basin.
Lake Winnipeg is in trouble because of phosphorus-laden run-off and sewage spewing into the Red River with the flood water.
Seventy per cent of the lake’s phosphorus load comes from snowmelt and river water that sit for weeks on flat farm fields along the Red River from south of Fargo, N.D., to Winnipeg every flood season.
This flood water sucks up phosphorous from the soil, manure, fertilizer, rotting crop residues and other organic matter. It all ends up in the lake.
The increased phosphorus leads to an increase in algae blooms — a process called eutrophication.
What is stressing the lake is the combination of climate change and a century of man-made changes.
There are five main contributors: Agriculture; natural nutrient loading, the atmosphere, Winnipeg waste and other waste water from a watershed that stretches from Ontario to Saskatchewan and south into the United States.
This year’s flood is predicted to approach the 2009 level, one of the five worst floods on record.
For the Red River, that means as much as 2,000 square kilometres of land will be under water between Fargo and St. Norbert.
Cleaning up the lake would mean making major changes in our way of life, not something scientists can see happening in the short term.
“As long as we see this really frequent flooding and as long as the land that’s flooded continues to be rich in phosphorus and as long as we’re going to have crops on the land, we’re going to fertilize it.
“We’re going to see surface blooms of (blue-green algae) washing up on the beaches. Things are not going to get any better. That’s what it means,” McCullough said.
In a 2012 study, McCullough found double the amount of phosphorus poured into Lake Winnipeg in the last decade and a half, compared with any other equal span in the previous century.
Coincidentally, the timing matched the onset of frequent major floods.
While scientific evidence is piling up about effects of climate change on the continental midwest, including the Red River basin, it is still inconclusive as to whether rainfall is on the rise.
“What is more important and more likely as we see more evidence of it, is we’re going to get more of these intense, large storms. They will produce more run-off,” McCullough said.
So with every clap of thunder, we should take warning, but here is where the story gets tricky.
McCullough says more run-off is only half of the equation. The other half is the way the water gets off the land. Lately, it flows off the land like water off a duck’s back — and that’s our fault.
Ninety per cent of the wetlands in the Red River Valley were drained in the last century. Today the water sluices off through drains that move a lot more water off the land a lot faster.
There is some control over who fills in wetlands and opens drains in Manitoba.
Farmers apply for licences, allowing the province to monitor the loss of wetlands and the number of drains. In Saskatchewan, it’s not illegal for farmers to cut drains to run water off their land — something that can cause the Assiniboine to come to us in a torrent in wet years, such as the 2011 flood.
And here is one more variable.
Much of the northern midwest is known as the Prairie Pothole Region and it was a natural sink for phosphorus and other nutrients.
“All the land used to hold phosphorus and the wetlands were like mini-treatment facilities holding on to phosphorus for hundreds, maybe thousands of years,” said Pascal Badiou, research scientist with Ducks Unlimited.
In a land mass now carved up into Iowa, Minnesota, Saskatchewan, Manitoba and southern Alberta, scientists have counted some five million ponds, but they are disappearing at an alarming rate.
With wetlands gone and more intense frequent storms and floods, saving Lake Winnipeg will be a challenge.
“It’s not going to be easy to figure out how to fix this,” said McCullough.
“You have to think about it in terms of reducing flooding. And if the problem is related in part to drainage, that’s something we can tackle,” McCullough said.
If it’s a problem related in part to climate change?
“That’s something, in theory, we can tackle. Although it’s not something we’ve shown we’re very good at.”
alexandra.paul@freepress.mb.ca
Republished from the Winnipeg Free Press print edition April 20, 2013 J16