Now This Is Interesting!

Maybe Volkswagen’s slogan “Drivers Wanted” must have inspired me to become a waterfowl outfitter because I put on an embarrassing amount of miles every year.

With the new website launch under our belt it’s now time to start on the rest of the wheel house. Outfitting for waterfowl in Manitoba

Hunting Coyotes in the rut.

Here is a great article I found in a “Outdoor Life” magazine.

If you love coyote like we do – giver a read..

The coyote of the winter months of February and March isn’t exactly the same animal it was just a few months earlier. Yes, it’s still smart, opportunistic, and stealthy. But the coyote experiences a number of drastic behavioral changes through the course of the winter, a reality well understood by the seasoned coyote stalker.

Around the first of the year, coyotes are getting themselves territorially established, says Dr. Julie Young, who heads the U.S. Department of Agriculture’s Predator Ecology and Behavior Project in Logan, Utah. At that time they are looking for a 7- to 10-square-mile territory where they can set up shop.

“By early to mid-January, the young of last year have pretty much dispersed,” says Young. These youngsters can roam for the next few weeks, often getting pushed around by established adults until they find their own niche in the landscape. But the larger reality driving coyotes and their behaviors in February and March is procreation.

Here’s how an in-depth look at that behavioral change and tips from the pros on how to capitalize on it.

The Need to Breed

By early February, with the mating fever on them hard, “Male coyotes patrol their territories and keep track of females,” says John Olson, a furbearer biologist for the Wisconsin Department of Natural Resources. “Because females go into estrus during late winter, both genders are super-active at that time in order to be certain of either being bred or doing the breeding.”

“Males can become very aggressive now,” Young notes. “Part of that aggression is to defend their territories from other males, part of it is to attract females.”

Once mates find each other, “They pair up very tightly, until well after the pups are born,” says Dr. Dan Harrison, a wildlife ecologist at the University of Maine. Actual mating will occur around the middle of February. Once that happens, activity increases. Even in relatively warm parts of the country, it’s cold enough now that coyotes need more calories than they did just a few months earlier. All the mating activity makes them even hungrier.

The Need to Feed

As winter goes on, carrion becomes a huge food source for coyotes. Studies in Wisconsin found that about half the food eaten by coyotes in the state’s southeastern counties during the deep winter months was carrion from livestock and poultry operations. In northwestern Wisconsin, similar research discovered that more than a third of the coyote’s winter diet was from deer carcasses. Landmark coyote research performed in the early 1980s at the University of Colorado by wildlife biologists Marc Bekoff and Michael Wells revealed that hunter-killed elk carrion provided the bulk of coyote forage during February and March in Grand Teton National Park in northwestern Wyoming.

“That time of year, there are a lot of carcasses around, and they provide low-risk food sources for coyotes, along with the small rodents they eat year-round,” Young says.

Carrion, if available, requires considerably less time and energy on the part of a hungry coyote, though that same coyote will turn up its nose at the easy meal during the summer.

Not that coyotes stop hunting for food in the winter. A 1995 study documented packs of coyotes hunting and killing deer and elk in the winter at Yellowstone National Park. The deeper the snow, researchers found, the more successful the coyotes were, presumably because the deer and elk were hindered by the heavy white stuff, but also possibly because the ungulates were malnourished.

In northern states, says Harrison, coyotes hunt hares, rabbits, and rodents during early winter. “But when you get really deep, fluffy snow, coyotes move into conifer stands, where the snow isn’t as deep,” he says. “That’s also where deer are wintering, so deer become a much likelier prey item now.”

As the snow deepens, coyotes frequent routes that require less energy to travel: deer or elk trails, roadways and river bottoms, lake ice, and even snowmobile trails. During snowstorms and periods of intense cold, they seek out burrows.

Whether it’s warm or cold, March sees a flurry of coyote activity across North America. Male and female pairs establish and mark their territories and can be seen running together as late as midday. Males fight off interlopers in defense of breeding areas.

Howling is a common behavior now, and a boisterous pair can sound like a dozen coyotes to the uninitiated. Females search out likely dens, excavating new ones or enlarging those of smaller animals. Females are also eating more, preparing their bodies for pregnancy.

Put all of this behavioral information, and the expert advice on these pages, to work for you and you’ll put more coyotes on the ground this winter. 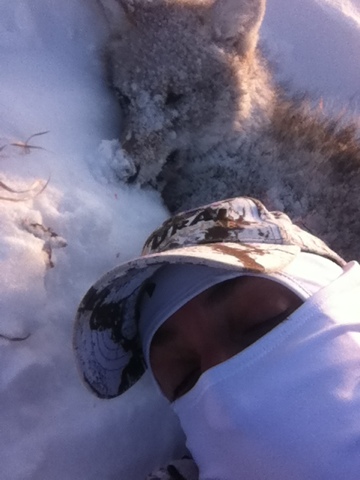 PrevPreviousThis is what SCI Reno looked like.
NextHere's some big news…..Next