Just resurfacing from one of the hardest decisions this family has ever had to make, Frances left us just a few days ago. She was

Cease the opportunity right! So school is canceled and sports are suspended, what now? Well, I enrolled my kids into the Dad’s Academy (lodge clean

Well, this sure isn’t what we all thought spring of 2020 would look like isn’t it.  Fortunately Manitoba hasn’t been hit as expected (under 300 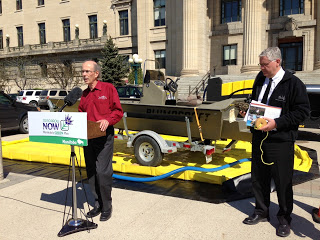 May 22, 2013
FIRST-IN-CANADA DECONTAMINATION UNITS
DESIGNED TO STOP INVASIVE AQUATIC SPECIES FROM ENTERING MANITOBA
Prevention
Is Our Best Defence:  Mackintosh
Two new high-heat, high-pressure mobile decontamination units will purge invasive aquatic species from boats entering Manitoba at border crossings, fishing tournaments, and high-traffic boat launches around the province Manitoba this summer, Conservation and Water Stewardship Minister Gord Mackintosh announced today, marking International Day for Biological Diversity.
The minister said the new first-in-Canada technology will protect the biodiversity of the province’s lakes, rivers, and other waterways.
“Manitoba has the longest-running invasive species protection program in the country,” said Mackintosh.  “We know prevention is our best defence and these new units will help support the province’s biodiversity, and commercial and recreational fishing opportunities.”
More than 90 per cent of boats that enter Manitoba from other states and provinces are exposed to invasive species that are not found in Manitoba, the minister said.  While species like the zebra mussel are not always visible to the naked eye, they can survive for 15 days outside of water, and if they invade, their voracious filter feeding can have devastating effects on ecosystems by leaving less food for larval and juvenile fish, he said.
Other species including quagga mussels, spiny waterfleas, rusty crayfish, and curly leaf pond weed also threaten aquatic habitats, fisheries and recreation on rivers and lakes.  However, they can all be safely and effectively removed using the portable and self-contained decontamination units.  All the water used to conduct the decontamination will also be recaptured, filtered and stored back on the unit.
The minister said the new units will be deployed at the Ontario boundary and the province is working with the Canadian Border Services Agency to deploy them at American border crossings, which will improve traffic flow during the summer and help make boat tourists’ entry more efficient.
Funding for the two $50,000 units comes from fishing licence surcharge revenues directed to the province’s Fisheries Enhancement Fund, which is administered by representatives from fishing organizations.
“In addition to helping remove the threat of these species to our waterways, these decontamination units also serve to educate Manitobans, and the people who visit here, that we must not take Manitoba’s fisheries for granted,” said David Carrick of Fish Futures.  “I am pleased the Manitoba government continues to be a leader in the country for protecting this resource into the future.”

Manitobans are reminded to take a few simple precautions every time they move watercraft, trailers and/or water-based gear between bodies of water.  This includes:
* cleaning and removing all plants, animals and mud;
* draining all water from motors, live wells, bilge, ballast tanks and bait buckets;
* drying all gear completely; and
* disposing of unwanted bait and worms in the trash. 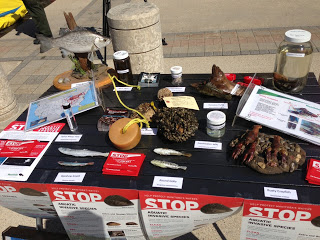 These easy steps can prevent the introduction or reduce the further spread of aquatic invasive species.  For more information on aquatic invasive species in Manitoba or to report a sighting, visit www.manitoba.ca/StopAISor phone 1-877-867-2470 (toll-free).
Under federal law, anyone releasing prohibited invasive species into Manitoba waterways can be fined a maximum of $100,000.  Full details are available at: http://laws-lois.justice.gc.ca/eng/regulations/SOR-87-509/page-21.html#h-40. 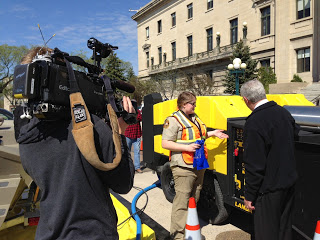 PrevPreviousHere is some stillwater fly fishing right by the lodge.
Next3 down 3 to go…Next